GRADUATE SCHOOL ONE YEAR OUT: putting away my folders

Let me begin by saying this is not my first rodeo: I have another graduate degree. I recall taking a wonderful visiting artist out to lunch mid-way through that earlier degree. He clearly said to me that it took him a good two years to recover from graduate school. Two years!! It seemed like sheer lunacy to me at the time; what was he talking about, what did he mean “recover,” I was doing just fine. Of course, the naiveté of the uninitiated reveals itself in retrospect. I now joke that it took me about ten years to recover. Add a few more years, and it was time for me to go back to school.

It might come as no surprise, then, that I told the announcer before I read in a local reading series this March that I had just graduated, in January. By the end of the evening, however, after ebullient congratulations on my newly minted degree, I was alerted by a companion to the fact that actually no, it wasn’t this January I had graduated, it was last January, over a year ago now. Over a year! Perhaps I truly am time challenged. In part that slip-up must come from a reluctance to let go of the intensity and the transformative qualities of that experience; a desire to hold onto that precious time when a community holds your creativity warmly in its hands and you feel “real”. Velveteen Rabbit real. But in graduate school you become a real writer, a real artist, not because anyone tells you this or a magic fairy grants you your livelihood, but because you decide you are. Because you decide for the love of it, and you do the work of it.

Before going back to school for writing, I harbored a large filing cabinet full of unpublished material. Going back to school for me signified an opportunity to crack that seal, open those files, to stop “writing in silence,” and to get my work out into the world. And so, after graduating, I left my stacks of books and files just as they were – spread about my studio, tumbling in disarray, catching dust and yet still managing to look in media res, ready for instant use, implying a certain badge of realness. I abhorred the thought of putting the equivalent of a new filing cabinet’s worth of materials away in metal drawers: it seemed to mark time too harshly, and unfortunately so. Would the writing disappear again behind that metal hum of order? What if I went to school for naught?

Now more than a year out, I am putting away my stacks of papers and folders. I’m happy to say I’ve published a thing or two, here and there; I’ve taught a workshop and read in a few local venues. But more importantly, I’ve sent out hundreds of poems, and I’ve pulled together a manuscript and a chapbook of new poems and I’m sending them out too. I’ve created a small writer’s group and stayed connected to my grad school community; I’ve read new poets and written a few reviews. And of course, this is the work of it. This is the “real writer” I was hoping to become – no not yet with a published book in hand, no rocket ship of fame for me, not yet. But I’m ok with that. I can put the folders away because I’ve kept working. There is so much still to come, and now I know it.

If anyone else in the community has a similar vignette they would like to share of their post-Residency life, please contact the Stonecoast MFA Alumni Page on Facebook or email me at trevor [dot] gulley [at] gmail.com. -Trevor

Stonecoast in Ireland will host its 20th residency in January 2016. Information and applications are available from Ted Deppe at theodore.deppe@maine.edu. The deadline for applying is 14 May 2015.

Sheila Boneham (Creative Nonfiction/Cross Genre, S’13) is honored to have learned that guest editor Rebecca Skloot has selected Sheila’s essay “A Question of Corvids” for inclusion in the 2015 Best Science and Nature Writing anthology, to be published this fall by Houghton Mifflin. The essay, an earlier version of which was Sheila’s graduation reading, won the 2014 Prime Number Magazine Award for Creative Nonfiction and has been nominated for a Pushcart Award. 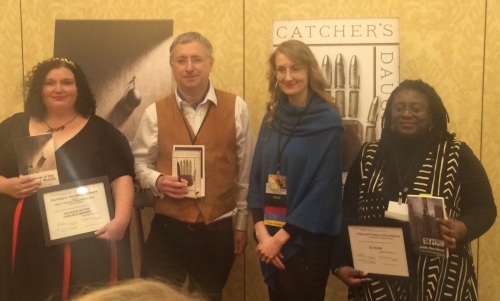 Sarah R. Flynn (Popular Fiction, W’15) has a piece forthcoming in the July issue of The Writer magazine. The feature article outlines how to create a writing workshop for adult literacy students and was influenced by her third semester project and graduate presentation. This is her first professional sale.

Cynthia Kraack‘s (Fiction, W’10) first literary novel, The High Cost of Flowers, is one of three finalists in two categories of the 25th Anniversary Midwest Book Awards: Literary Fiction and Contemporary Fiction. The competition, sponsored by the Midwest Independent Publishing Association, is judged by experts from all aspects of the book world. They select winners and finalists from a 12-state region based on overall excellence. Cynthia’s first speculative fiction novel, Minnesota Cold, won the 2009 Northeastern Book Award for Fiction. 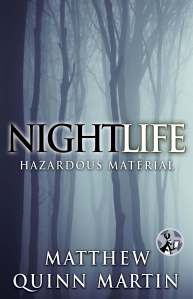 Matthew Quinn Martin’s (Popular Fiction, S’10) novella Nightlife: Hazardous Material will be released by Pocket Star/Simon & Schuster on May 11. T.L. Costa, critically acclaimed author of Playing Tyler, has called the book “A taut, mesmerizing tale of horror, madness and video games. It’s as if Stephen King penned Ready Player One. Readers will devour this in one sitting.”

For the second year in a row, Roxanne Ocasio (Popular Fiction, W’15) and Kristabelle Munson (Fiction, current) have been accepted into the prestigious VONA/Voices writers’ workshop in Miami. Co-founded by Junot Diaz, VONA is the only writers’ conference in the country with a multi-genre focus on writers of color as students and teachers.

Alexandra Oliver (Poetry, W’11) has had her latest manuscript, Lost Property Hotline, accepted for April 2016 publication by Biblioasis. Her poem “Margaret Rose” (previously published in The Walrus) will be appearing in Best Canadian Poetry 2015. This has been a busy time for Alexandra, who is also celebrating the release of Measure for Measure: An Anthology of Poetic Meters (Random House/Everyman), co-edited with Annie Finch. Here she is in action earlier this month, reading at the Tree Series in Ottawa:

Bruce Pratt‘s (Fiction, S’04) poem “Think of Sophia Loren” will appear in the 2015 edition of Stolen Island Review. He recently played the principal role in the short film Harvey’s Dream adapted from the Stephen King story of the same name that appeared in The New Yorker several years ago. In addition to playing Harvey, he consulted with the writer-director, Ryan Shelley, on the script. A fall premier is to be scheduled at the University of Maine.

“Side Effects,” a short story by Karen Pullen (Popular Fiction, S’08), will appear in Reed Magazine, Issue 68, in May. In January, Karen’s story “Brown Jersey Cow” was published online by Every Day Fiction, the once-a-day flash fiction magazine.

Beth Slattery‘s (Creative Nonfiction, S’10) essay, “Hello to All That,” which explores Joan Didion’s writing, was published in the Spring 2015 issue of Assay: A Journal of Nonfiction Study.

J.G. Strauss (Fiction, S’14) will read from her novel-in-progress, The Three Lives of Gráinne Ó Mháille as part of Cape Whale at SEA Space in Provincetown, MA, on May 1st, 2015. 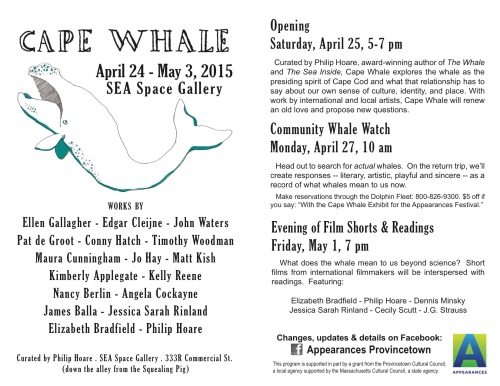 Bonnie Jo Stufflebeam‘s (Popular fiction, S’13) fairy tale story “Dance Our Shoes to Pieces” appeared in the most recent issue of Farrago’s Wainscot. “An Exodus of Wings” has been reprinted in the audio magazine The Drabblecast. “Six Ways to Break Her” appeared on the newly-designed SmokeLong Quarterly along with an interview. “The Way of Things” appeared in Crack the Spine alongside another interview.

Ashley Warren‘s (Fiction, S’12) short story “Cataphile” has been selected as an honorable mention for Volume 27 of Allegory.

Tamra Wilson (Fiction, S’11) has retired from the Catawba County (NC) Library System. Her  9-year library newspaper column has converted to a more general one titled “Fork in the Road.” Her essays are also posted on her website.

Elisabeth Tova Bailey‘s (Creative Nonfiction) book, The Sound of a Wild Snail Eating, was published by Algonquin Books in 2010. Now the digital audiobook has just been released by audible.com. The CD edition of the audiobook will launch from Brilliance in July with narration by Renee Raudman. The Chicago Tribune audiobook review is here.

Kristabelle Munson (Fiction) has been invited to give a presentation at Queers & Comics, the first university conference for queer cartoonists and comics writers with keynote speakers Alison Bechdel and Howard Cruse. Kristabelle will show pages of a graphic novella written at Stonecoast.

Marian Romero‘s (Popular Fiction) poem “A portrait of the witch at sixteen” was featured in Abyss and Apex online magazine.

Jaed Coffin (Creative Nonfiction, Fiction, Writing for Social Change) has accepted a tenure-track position as assistant professor in the English department at the University of New Hampshire, beginning in fall 2015. He’ll be teaching both in the MFA and undergraduate creative writing programs.

Ted and Annie Deppe (Poetry, Coordinator of Stonecoast in Ireland) will be giving a poetry reading at the Connemara Mussel Festival, Mweelrea Hotel, Tully Cross, Ireland, at 6:00 p.m. on 2 May 2015. They will also be reading on the Aran Islands on 21 May for Old Dominion University. Ted’s next U.S. reading has been confirmed for Old Dominion University in Virginia on 8 October 2015. 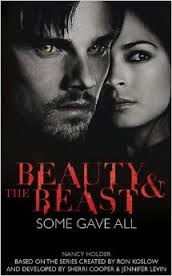 When astronauts overcorrect a negative turtle jacket on their high-tail thruster, initiating precautionary self-destruct protocol, they have only one recourse: radio Mission Control. Unfortunately, Mission Control has been privatized. Mike Kimball‘s (Popular Fiction, Scriptwriting) 10-minute play Houston will be staged at the Boston Theatre Marathon—50 ten-minute plays, written by 50 playwrights, produced by 50 theatre companies in one day: Sunday, May 10, starting at 12:00 p.m. at the Stanford Calderwood Pavilion at the Boston Center for the Arts, 527 Tremont Street, Boston. Houston will also be staged in Portland, Maine, at the Maine Playwrights’ Festival—seven short plays by Maine playwrights May 13-16 at the St. Lawrence Arts Center. 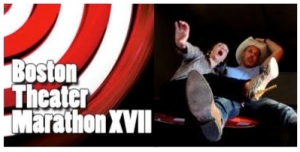 Elizabeth Searle‘s (Fiction, Popular Fiction, Scriptwriting) rock opera—Tonya & Nancy: the Rock Opera—will be produced in New York City this summer as an official full-production show at the New York Musical Festival (NYMF) with multiple performances in July, dates TBA. Elizabeth will be in NYC with the show during the residency but she hopes to see some Stonecoasters at “ringside” at the show. Check out the coverage in Theater Mania. For info and updates on performances and tickets, visit www.tonyaandnancytherockopera.com