Kathy Briccetti (Creative Nonfiction, W’07) has accepted an adjunct instructor position teaching a Transitional English class (e.g. English 95) at The Art Institute of California in San Francisco. Before launching into each day’s discussions, grammar practice, and writing instruction, she reads a poem and offers a five-minute free-writing period. The students now know that poems do not have to rhyme or declare romantic love. Visit her website here.

Jennifer Marie Brissett‘s (Popular Fiction, S’11) story “Secrets of the Sea” is a finalist for the 2013 storySouth Million Writers Award. 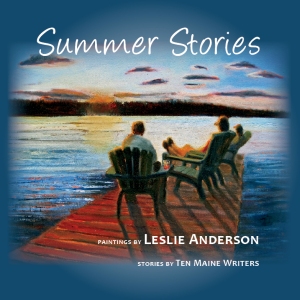 Nancy Brown‘s (Fiction, S’08) short story “Hay Day” appears in Summer Stories, published in November. The book features a series of paintings by Maine artist Leslie Anderson along with a dozen short stories by ten Maine writers. The stories, which were inspired by the paintings, were selected by Maine author Ron Currie, Jr., as part of a contest sponsored by Shanti Arts Publishing and the Maine Writers and Publishers Alliance.

Bruce Pratt‘s (Fiction, S’04) villanelle “According to a Spokesman” has been selected for the upcoming anthology Veils, Halos and Shackles: International Poetry on the Abuse and Oppression of Women. His short story “Marble” will appear in the December issue of Solstice.

“Make Me Beautiful,” a short story by Karen Pullen (Popular Fiction, S’08), was published in the December 2013 issue of bosque (the magazine).

Patricia Smith (Poetry, S’08, and former Stonecoast faculty) was awarded the Lenore Marshall Poetry Prize ($25,000) from the Academy of American Poets for Shoulda Been Jimi Savannah, chosen as the most outstanding book of poetry published in United States last year.

Bonnie Stufflebeam‘s (Popular Fiction, S’13) poem “Strange Monster” appeared in the most recent issue of Mythic Delirium. Her short story “Mrs. Stiltskin” appeared in the first issue of Lakeside Circus. She is also thrilled to have taken part in the successful Kickstarter campaign for the anthology Kaiju Rising: Age of Monsters, which should be released in the next couple of months.

Alexis Paige‘s (Creative Nonfiction) latest essay, “Arrivals, an Autobiography,” appears in the November issue of Pithead Chapel. She also won the New Millennium Nonfiction prize for her essay “The Geography of Consolation,” which “examines the unique challenges of a writer’s life, the long fallout of an emotional affair, and the inevitable realization that no matter how far or how often we roam, the internal journal still lies before us.” She’ll receive $1,000, and the essay will be published online and in print in the 2104 issue.

Jeanne Marie Beaumont‘s (Poetry) ekphrastic persona poem “In Preparation,” which she read at the summer residency flash reading, is featured on the American Arts Quarterly site along with the Gustav Courbet painting that inspired it.

Aaron Hamburger (Creative Nonfiction, Fiction, Popular Fiction) sold his short story “Honeymoon for One” to Subtropics magazine; it will appear early next year. (Thanks to Suzanne Strempek Shea for editorial guidance and moral support!)

Jim Kelly‘s (Popular Fiction) story “The Promise of Space” from the September issue of Clarkesworld has been selected for The Best Science Fiction and Fantasy of the Year: Volume Eight, edited by Jonathan Strahan (Solaris Books). His 2000 Hugo Award-winning novelette “10^16 to 1” will be reprinted in an upcoming issue of Clarkesworld. His novelette “The Chimp of the Popes,” first sold in 2009 (!), is finally scheduled for publication in The Book of Silverberg, edited by Gardner Dozois (Subterranean Press) in the summer of 2014.

Alexandra Oliver‘s (Poetry, ’12) Meeting the Tormentors in Safeway is the first poetry book in Biblioasis’ history to have received a full review from critic Michael Lista in The National Post (one of Canada’s two national papers). You can read the review here.

On December 4th, Elizabeth Searle (Fiction, Popular Fiction, Scriptwriting) reads from the new anthology Knitting Yarns (which is out from Norton and which includes Suzanne Strempek Shea) in Pawtucket, RI, at Slater Mill. Knitting Yarns received a four-star review in People and was a recommended book in Vanity Fair. Elizabeth is also reading on December 9th at 4:30 p.m. at the New England Institute of Art bookstore in Brookline, MA, along with fellow Iowa Short Fiction Prize winner Kate Milliken. Elizabeth will read from her own Iowa Prize collection My Body to You, which was re-released in a new paperback version in 2011. On December 20th, at the Armory Center for the Arts in Somerville, MA, a Stonecoast event will be presented by alum Richard Cambridge as part of his series Poet’s Theater. A Night at the Theater will combine theater and performance-style readings. Elizabeth’s short play Stolen Girl Song, which premiered at the Northern Writes New Play Festival in Maine in 2012, will be performed by actress Norah Bird and directed by Bruce Pratt. The event will also feature readings/performances by Bruce, Richard, and Stonecoasters Alexis Paige, Enza Vescera, Barbara Greenbaum, Anthony D’Aries, Amy M. Alvarez, and Mikhu Paul.