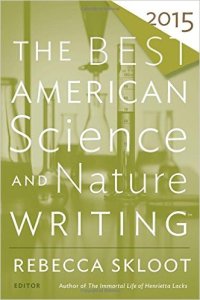 Sheila Boneham (Creative Nonfiction/Cross Genre, S’13) is pleased to announce the release of Shepherd’s Crook, her fourth Animals in Focus mystery from Midnight Ink. Her essay “A Question of Corvids” will also appear this month in the 2015 Best American Science and Nature Writing anthology edited by Rebecca Skloot, and her poem “Spin” will be appear in 27 Views of Wilmington, also being released in October by Eno Publishers. Sheila will be giving a reading with several other North Carolina Arts Council Artist Fellowship recipients in Wilmington on October 4th, and as part of a “release slam” for 27 Views on October 24.

Karen Bovenmyer’s (Popular Fiction, S’13) short story “What the Dollhouse Said” will be in a forthcoming episode of Pseudopod! She’s so excited! She’s been an avid listener for four years and has every episode on Podisc. Her micro fiction “So Normal and Unwritten” will be reprinted in a forthcoming edition of Bosley Gravel’s Cavalcade of Terror. Her story “The Scarlet Cloak,” from her Stonecoast thesis, will be reprinted in the December 1 issue of Luna Station Quarterly, a speculative fiction magazine featuring stories by emerging women authors. She is using skills she learned writing Stonecoast homework to create book reviews and editorials for the magazine Mothership Zeta, which debuts October 15 with its first issue (she is the nonfiction editor, alumna Mur Lafferty is the editor-in-chief). Issue 0, featuring book reviews from Stonecoast faculty Liz Hand and short story reviews from alum Bonnie Stufflebeam is already available for free download at http://mothershipzeta.org/. Issue 1 will feature a short story by Bonnie and a “Story Doctor” analysis of why her story works so brilliantly by faculty James Patrick Kelly, as well as a “Favorite 2014-2015 Graphic Novels” review by alum Adam Gallardo. Karen is thrilled to be working with so many talented people!!!! 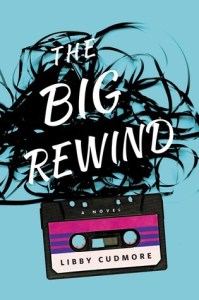 Libby Cudmore‘s (Creative Nonfiction/Popular Fiction S’10) debut novel The Big Rewind (William Morrow) received a starred review from Kirkus Reviews, who called it “A mystery that will inspire more than one playlist and, hopefully, a sequel.” The book is slated for release on February 2, 2016.

A short film written by Adam Kreutz Gallardo (Popular Fiction, S’12), Monster Movie, is an official selection at this year’s McMinnville Short Film Festival on October 3rd. The film is based on his novel, Zomburbia.

Penny Guisinger’s (Creative Nonfiction, S’13) piece “Coming Out” is listed as a notable essay in the 2015 volume of Best American Essays, edited by Ariel Levy. The piece originally appeared in Fourth Genre, fall 2014.

Lexa Hillyer (Poetry, S’10) was named producer on a forthcoming TV show from WBTV based on Legacy of Kings by Eleanor Herman, the first book in a series she created, plotted and edited with her literary company Paper Lantern Lit. Read more here.

Authors Bill Roorbach, Susan Conley, and Meredith Hall will discuss the “Joys & Challenges of Writing Fiction, Non-fiction, & Memoir,” moderated by Helen Peppe (Creative Nonfiction, ’11) on October 18, 2015, from 1:00-4:00 p.m. Open to the public. Authors will have books for signing. Contact Laurie Skillings: laurie@addwithease.com for location and directions.

Karen Pullen‘s (Popular Fiction, S’08) short story “#grenadegranny” is included in the Bouchercon 2015 anthology Murder Under the Oaks, edited by Art Taylor and published by Down & Out. The anthology will be available after Bouchercon, the world’s biggest mystery fan convention, in Raleigh, NC, on October 8-11. Her second mystery novel, Cold Heart, has been accepted by Five Star Cengage for publication in August 2016.

Marian Romero‘s (Popular Fiction, S’15) story “Ruta Lato and the Ghost of the Revolution” will be appearing in Betwixt this month.

All Our Yesterdays, a new film by Jacob Strunk (Fiction, W ’07), begins its festival run with an October 18th premiere at HorrorQuest Film Festival in Atlanta, Georgia, just in time for Halloween.

Bonnie Jo Stufflebeam’s (Popular fiction, S’13) “Sleeping With Spirits” is due to appear in Motherzhip Zeta, the new magazine edited by fellow Stonecoasters Mur Lafferty and Karen Bovenmyer, on October 15; this story was written for a Stonecoast humor workshop with James Patrick Kelly and Aaron Hamburger. Her roundup of the best short fiction of 2014 was in their Issue 0, available for free download at http://mothershipzeta.org/. Her dark fantasy story “A Careful Fire” will appear in Beneath Ceaseless Skies this month. Her poem “The Werewolf” has been reprinted in Tony Barnstone and Michelle Mitchell-Foust’s Monster Verse anthology.

Lisa C. Taylor‘s (Poetry, S’04) first collection of short fiction launched in Ireland on September 3rd (Pearse Street Library in Dublin) and September 5th (Charlie Byrne’s Book Shop in Galway). Ted and Annie Deppe were among the attendees at the Galway reading. It will launch in the United States on November 14, 2015, at the Mansfield Center Library in Mansfield, CT. See www.lisactaylor.com for details of her upcoming readings. Here is a link to one of the early reviews of the book (even though it says it was released in January, this is incorrect; the book was published in Ireland in August). This collection should be widely available by mid-November. Lisa looks forward to reading in Maine, perhaps in December or January. 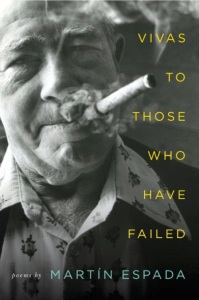 Martín Espada‘s (Poetry, Writing for Social Change) new collection of poems, Vivas to Those Who Have Failed, is forthcoming from W.W. Norton in January.

Nancy Holder (Popular Fiction) has a new book out on October 15: the official novelization for the new Guillermo del Toro movie, Crimson Peak. She was approved by del Toro and attended a private screening at Legendary Pictures with some VIPs from Universal Studios. Both the movie and book will come out in mid-October. “In Arkham Town Where I was Bound,” a Lovecraftian story narrated by Edgar Allan Poe received an honorable mention in Ellen Datlow’s Year’s Best Horror of the Year Volume 7. Nancy read the story last winter at Stonecoast.

October 14-25, Mike Kimball‘s (Popular Fiction, Scriptwriting) play Best Enemies will be staged at the Studio Theater at Portland Stage, 25A Forest Ave, Portland ME. Two cowboys, lone survivors of a sabotaged rodeo cruise, are marooned together on a tiny desert island. To preserve their sanity, they’ve invented imaginary geography and instituted a system of laws, but ultimately they go to war over their shared cowboy hat. The Portland Phoenix called the Best Enemies “A sly, haunting, and remarkably fun new existential comedy . . . nimble, irreverent, and immensely entertaining,” and The Portsmouth Herald described it as “Smart, funny, poignant and creepy.” Tickets available for purchase here.

David Mura (Creative Nonfiction, Fiction, Poetry, Writing for Social Change) published his essay, “Asian Americans: The Front & Back of the Bus” in the anthology A Sense of Regard: Essays on Poetry & Race. He was guest blogger for the Gulf Coast Literary Journal (his own blog is blog.davidmura.com). He’s just completed a book of essays on creative writing and is finishing up his book of essays on race. His conversations on race and the arts with Minnesota artists can be found on youtube and his conversation with Stonecoast faculty member Alexs Pate is also on the Minnesota Public Radio website.