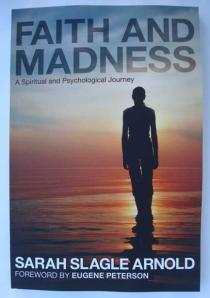 Sarah Slagle Arnold‘s (Creative Nonfiction, S’05) memoir, Faith and Madness: A Spiritual and Psychological Journey, was published August 1, 2012, by Wipf & Stock’s Cascade Books imprint. The story of growing up with a manic-depressive father and Sarah’s own major depression at age 19 takes place in the Depression years of the 30s and 40s. The department store where Sarah worked only part-time paid for her three-time-a-week therapy, which she believes saved her life, for a year and a half. Receipt of her first royalty check in March was a thrill, Sarah reports, and should be shared with all her mentors at Stonecoast. Look for Faith and Madness at the summer 2013 residence or on Amazon. 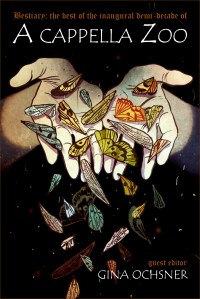 Julie Day‘s (Popular Fiction, S’12) story “Finding Your Way to the Coast” appears in A capella Zoo‘s best-of, fifth-anniversary edition, entitled Bestiary: The Best of the Inaugural Demi-Decade of A capella Zoo.

Christopher Fisher‘s (Fiction, W’08) novel A History of Stone and Steel will be released in print and available via Amazon.com this month. The novel, which he affectionately calls HOSS, began as his creative thesis at Stonecoast.

Jeanette Lynes‘ (Poetry/Fiction ’05) sixth collection of poetry, Archive of the Undressed (Wolsak & Wynn, 2012) has been shortlisted for two Saskatchewan Book Awards:  the Poetry Award and the Saskatoon Book Award.

Sandra McDonald (Popular Fiction, W’05) recently attended the AWP national conference in Boston and participated in a panel about Low-Res MFA programs as well as the Stonecoast reading at the Boston Public Library. She also attended the International Conference on the Fantastic in the Arts in Orlando and read from her story “The Black Feminist’s Guide to Science Fiction Film Editing” (forthcoming, The Year’s Best Science Fiction and Fantasty 2013).

Mihku Paul (Fiction, S’10) will be participating in a group ekphrasis exhibit at the Yarmouth Memorial Library (Yarmouth, ME) titled Poets Speaking to Silent Works of Art, April 8-May 25. She will contribute a poem to accompany Evelyn Dunphy’s watercolor painting The Embrace, which can be viewed on the YML site.

Bruce Pratt‘s (Fiction, ’04) short play Memories of Paradise will be performed as part of the Maine Playwright’s Festival and will appear in the March issue of Aethlon: The Journal of Sports Literature. The play festival runs from April 25-May 5 at the St. Lawrence Arts Center in Portland, ME. Information is availabler here (Stonecaost faculty member Mike Kimball has a play in the festival, too). Also, Bruce will join fellow Stonecoast classmate Marcia Brown in Cape Elizabeth for the May Local Buzz reading on Saturday, May 18, 4:00-5:00 p.m.

Steve Rhodes (Poetry, W’11) reports that three of his poems—“Possums,” “Sparrows,” and “Toad”—will be part of an exhibition, “Fables of the Eco-Future,” at the Hambidge Center for the Creative Arts and Sciences in Rabun Gap, GA. The exhibit (March 30-June 8), by both visual artists and writers, will feature works either about environmental degradation or its alternative. 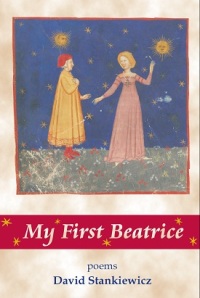 Moon Pie Press published its 70th poetry book, My First Beatrice by David Stankiewicz (Poetry, S’05), recently. Former Stonecoast faculty member Baron Wormser said of David’s collection: “David Stankiewicz’s poetry has a natural depth and balance to it. Degrees of tenderness, ruefulness and the ever-new standbys that are grief and joy intermingle and influence one another so that the complexity of a moment or feeling or place or life is properly honored. The sensibility at work here is at once American in its feeling for how locales speak and European, specifically Polish, in its feeling for the shades and shadows of history. The poems are, above all, shot through with love. The poet’s hand and heart are—as it should be—intimately connected.”

Erin Underwood (Popular Fiction, S’09) invites you to a Reading & Signing for Futuredaze: An Anthology of YA Science Fiction, co-edited by Erin and Hannah Strom-Martin (Popular Fiction, W’09) and published on February 12, 2013.

Date: Saturday, April 6
Time: 11:00 a.m.-1:00 p.m.
Location: Spirit of ’76 Bookstore, 107 Pleasant Street, Marblehead, MA 01945
Young adults will be reading excerpts from Futuredaze at the Spirit of ’76 Bookstore in Marblehead! A reception and book signing with Marblehead resident Erin Underwood, the anthology’s co-editor and publisher, will follow. Students aged 12 to 18 are encouraged to drop off in advance or write a one-paragraph essay at the event on why they like to read science fiction to be entered in a drawing for two signed copies of Futuredaze. More information here.

Ed Ferrara (Popular Fiction) has just sold his short story “Gig Marks” to the horror podcast Pseudopod. No firm information yet as to when the story will appear, but it could be within the next few months.

“A Decent Happiness,” an essay by Alexis A. Paige (Creative Nonfiction), appears in the March issue of Pithead Chapel. Also, she guest blogged during AWP for Brevity Magazine, which plans to feature two of her posts.

Bonnie Jo Stufflebeam‘s (Popular Fiction) short story “The Siren” will appear in Strange Horizons on April 15. You can read it for free here.

Ted Deppe and Annie Deppe will give a reading at 7:00 p.m. on April 15 at Manchester Community College as part of the Mishi-maya-gat Spoken Word and Music Series. The reading is free and open to the public, and it will be followed by an evening of jazz with Norman Johnson and featured musicians. The address is 903 Main Street, Manchester, CT. More information can be found here.

Nancy Holder (Popular Fiction) has a busy April. On Saturday, April 6, at 10:30-11:30 a.m., she will participate in The Horror Panel: Dead and Loving It, with a signing following, at Literary Orange: A Celebration of Authors, Readers, and Libraries, to be held at the Irvine Marriott. On April 20, she will sign from 12:00-2:00 p.m. in the Horror Writers Association Booth (#859) at the Los Angeles Times Festival of Books, held on the campus of the University of Southern California; she will also work in the booth on Saturday. On April 23, she will participate in World Book Night; her book is Fahrenheit 451. And on April 24, Nancy will participate in the Chapman University Pub(lishing) Crawl; students will meet and greet authors and discuss publishing; Stonecoast poetry faculty member Tony Barnstone will also participate.

On April 1st, Mike Kimball‘s (Popular Fiction, Scriptwriting) short play Janey Succumbs to Polar Madness will have a staged reading at Stonecoast alum Emily Young‘s ongoing author series Portland Writes at LFK burger bar (188A State Street, Portland, ME. 207.899.3277). STONECOAST ALERT: Jim Kelly and Emily Young will also be reading! Drinks at 8:00 p.m.; readings at 9:00.  Also, a full production of Mike’s Janey Succumbs to Polar Madness will be staged as part of the 12th annual Maine Playwrights Festival at the St. Lawrence Center for the Arts in Portland, ME, April 25-May 5. See the schedule here.

On April 6, Elizabeth Searle (Fiction, Popular Fiction, Scriptwriting) will read in the Storied Nights reading series, sponsored by the Somerville Arts Council at Bloc 11 Cafe, 11 Bow Street, Somerville, MA, from 7:00-9:00 p.m., along with other authors, storytellers, and host Daniel Gerwetz. On April 22, a New York City showcase of Tonya & Nancy: The Rock Opera will be performed, featuring Broadway star Melissa Van Der Schyff as the Mother(s) and directed by Kenny Howard of Broadway Consortium. This NYC showcase is produced by Paul Boghosian and Harborside Films. For more information, check Events on Elizabeth’s website.

Via Christopher Fisher: Attention novelists: If you’ve complete a book (maybe a NaNoWriMo manuscript you’ve been sitting on and wondering what to do with) and you have considered going indie/self-pub with it, then you need to check this out! The Editorial Department’s contest is free to enter, and the winning manuscript receives a grand-prize book design package worth $2500. If a lack of funds is the only thing keeping you from publishing, then this could be your ticket to having a book in print (and Kindle) and available for sale on Amazon as soon as this October!

Via Bruce Pratt: The American Fiction Prize (The Best Unpublished Short Stories by American Writers). This series, whose first six issues were published by Birch Lane Press/Carol Publishing Group, was called “a must-read collection for all short-fiction enthusiasts” by Booklist. The series moved to New Rivers Press in 1997; editors Alan Davis and Michael White chose previously unpublished stories for inclusion in the first ten volumes. Volumes 11 (2010) and 12 (2012) were edited by Kristen Tsetsi, Bayard Godsave, and Bruce Pratt. Volume 13–set for publication in 2014–is being edited by Bruce Pratt. A well-known writer serves as guest judge, chooses three prizewinners who receive a cash award, and writes the introduction. This year’s judge is Michael White. In 1998, Writer’s Digest chose the series as one of the top fifteen fiction magazines in the United States.

Contest Guidelines: New Rivers Press will publish approximately twenty short stories in each American Fiction volume, subtitled The Best Unpublished Stories by Emerging Writers. We seek well crafted, character driven literary fiction in any genre with a maximum of 10,000 words per story. Each of the selected story authors will receive national publication and distribution, author discount, and two complimentary copies. $1,750 in prizes will be awarded. ($1,000 for 1st place, $500 for 2nd place, and $250 for 3rd place). The finalist judge for Volume 13 is Michael White. There is a reading fee of $16 for each online submission from Feb. 1 through June 15 at the Submittable website.

Submit electronically or mail entries to

Mailed entries must include a cover page with your name, story title, mailing address, and email address. Do not include your name on the pages of the story. Please ensure all stories are typed, double-spaced, and that the title and page number appear on each page. Please include a self-addressed, stamped envelope and an e-mail address.

We welcome multiple entries ($16/story). For entries outside the U.S., please send entry fee in U.S. currency or money order. While we cannot return manuscripts, we will forward a list of the winning stories to any entrant who includes an SASE and we will e-mail contest updates to anyone who provides an active e-mail address. Entrants retain all rights to their stories.

Please e-mail any questions to obdriveway@aol.com

Via Christopher Fisher: Call for applications: The Editorial Department is looking for an experienced book designer for independent contractor work. See the ad here for details and to apply.