Bunny Goodjohn (Poetry, W’07) has creative nonfiction in the latest issue of Pithead Chapel. She has also wrangled a place on the Jessie duPont three-week summer-seminar series entitled “Constructing Childhood: Words and Pictures.”

Sandra McDonald (Popular Fiction, W’05) sold the story “End of the World Community College,” a tongue-in-cheek story of apocalypse and hope, to The Magazine of Fantasy and Science Fiction for publication later this year. Visit her at www.sandramcdonald.com.

Carolina Crimes: 19 Tales of Lust, Love, and Longing, published by Wildside Press, features stories by Sisters in Crime mystery writers from the Carolinas. A book trailer can be seen here. Karen Pullen (Popular Fiction, S’08) edited the stories, which includes her own “The Fourth Girl” about a recently fired teacher who inherits her aunt’s estate and finds that it comes with an unusual small business.

In April, Steve Rhodes‘ (Poetry, W’11) second poetry collection was published by Wind. Of What Might Not Be Steve says, “This collection is a sequel to The Time I Didn’t Know What to Do Next. I’m trying to ponder those moments and places where the possible rubs up against the unlikely, where the boundary between ‘is’ and ‘might or might not be’ becomes blurred. I very much appreciate what Ted Deppe says about this collection: ‘These poems wonder at our being here at all.'”

Michaela Roessner-Herman (Popular Fiction, S’08) has been asked to contribute to an upcoming Science Fiction & Fantasy Writers of America Cookbook—the third that SFWA has produced, this time as part of SFWA’s 50th anniversary celebration in 2015. Michaela has previously provided recipes for two other genre-related cookbooks, both of which where fundraisers for the Tiptree Award: Her Smoke Rose Up from Supper and The Bakery Men Don’t See.

Lisa Romeo‘s (Creative Nonfiction, S’08) flash essay “Coffee Regular,” an excerpt from her memoir-in-essays manuscript, appeared in the March issue of Gravel Magazine. Lisa was interviewed recently for The Writer’s Hot Seat section of the Barnstorm Journal blog. She would like to remind all in the Stonecoast community that she extends an open invitation to feature your guest post at her blog to help support your book or other creative project.

Lisa C. Taylor (Poetry, ’04) will be presenting a workshop on “Going into Dark Places: Taboos in Writing” at the Massachusetts Poetry Festival in Salem on May 3, 2014, at the Hawthorne Hotel. A recent interview with Lisa is in the online edition of The Worcester Review; her poem “Cathedral of Shadows” was published there in March. Also, she has new fiction appearing in Bartleby Snopes online and Mulberry Fork Review online.

Adrienne S. Wallner (Poetry, W’09) has accepted a position as a Wilderness Instructor with New Vision Wilderness, a wilderness immersion therapy and education program in northern Wisconsin. Some writing-specific work she will be doing with clients includes therapeutic journaling, poetry, ekphrasis, and nature writing. She is very excited to start her new position in September. (Those of you who spoke with her at AWP—yes, this is the job she was talking about!).

Tamra Wilson (Fiction, S’11) is thrilled to see her story “The Cozy Corner” in volume three of The New Guard. The story, excerpted from her Stonecoast creative thesis, was a finalist for the Machigonne Fiction Contest.

Boman Desai‘s (Fiction) novel The Lesbian Man was shortlisted for the Dana Award for novels. The first chapter of the same novel won first place in a competition of first chapters late last year.

Aaron Hamburger‘s (Creative Nonfiction, Fiction, Popular Fiction) short story “Honeymoon for One” (which he read at the last residency) is in the new issue of Subtropics.

Elizabeth Hand‘s (Fiction, Popular Fiction) essay “Saved by Obamacare,” about her experience with the Affordable Care Act, appeared in Salon.

Nancy Holder (Popular Fiction) has a story in Dead But Not Forgotten: Stories from the World of Sookie Stackhouse. The Anthology will be released first by Audible on May 13, with hardcover and e-book releases in November. She is also an Author Guest of Honor at the World Horror Convention May 8-11 in Portland, OR.

Three new appearances in print this month for Jim Kelly (Popular Fiction): “The Pope of the Chimps” in The Book of Silverberg, edited by Gardner Dozois and William Schafer published on May 1; “Bernardo’s House,” a stand-alone e-book in English and Italian from Roman publisher Future Fiction; and “The Promise of Space” in The Best Science Fiction and Fantasy of the Year: Volume Eight, edited by Jonathan Strahan, due on May 18. His super-hero story “The Biggest,” originally commissioned by Stonecoast alumna Mur Lafferty, has been recorded for the podcast Starship Sofa Episode 334. Jim has adapted “The Promise of Space” for the stage and it will appear this fall in the anthology Geek Theater: 12 Plays by Science Fiction and Fantasy Masters, edited by Jen Gunnels and Stonecoast alumna Erin Underwood.

Debra Marquart‘s (Creative Nonfiction, Poetry) essay “Not All There” appeared in Prairie Gold: An Anthology of the American Heartland. Her poem “Kablooey Is the Sound You’ll Hear” was published in The Normal School: A Literary Magazine. Also, Debra traveled inside the North Dakota oil boom under a grant from the North Dakota Humanities Council during November of 2013. She taught writing workshops in thirteen communities impacted by the oil boom for a research project. Read about her first impressions of this fast-moving environmental story inside the Bakken oil boom here.

A Month Inside the Oil Boom: the North Dakota highway leading into the Badlands (photo provided by Debra Marquart).

Alexandra Oliver‘s (Poetry, ’12) book Meeting the Tormentors in Safeway has been shortlisted for the Pat Lowther Memorial Award, given for the best book of poetry by a Canadian woman published during the previous year. The winner of this award will be announced in June. An interview with Rob McLennan on the subject of this nomination can be found here. In addition to this, Alexandra is this month’s Guest Contributor for the BANG section of The New Guard Review.

Suzanne Strempek Shea‘s (Creative Nonfiction, Fiction) Portland, ME, reading from her newly released book This Is Paradise has been rescheduled to Thursday, May 22. She thanks those who first marked their calendars for May 8, then May 9. She promises this will be the last date change. The reading will be held at 6:00 p.m. at The Gallery at Harmon’s and Barton’s, 584 Congress Street. This Is Paradise is the story of the Irish woman Mags Riordan and the medical clinic she founded in the remote Malawian village where her son died while on holiday. A TV interview with Mags Riordan and Suzanne is here. A story on the book, from The Republican of Springfield, MA, is here. Suzanne will also be reading May 31 at 11:00 a.m. at Toadstool Books in Peterborough, NH, and on the same at the Toadstool store in Keene, NH, at 2:00 p.m. The books was launched April 23 at Broadside Bookshop in Northampton, MA, and Suzanne thanks all the Stonecoasters who attended. Two days later, Suzanne served as emcee for Bay Path College’s 19th annual Women’s Leadership Conference in Springfield, MA. Bearing the theme “Own Your Story,” the event featured television legend Barbara Walters, New York Times columnist Bruce Feiler and Syria Deeply founder Lara Setrakian, and was attended by a crowd of more than 2,000. 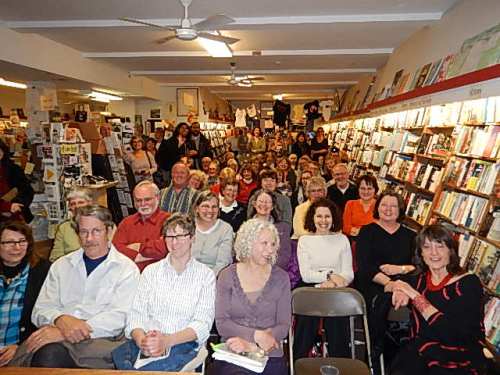 Call for Submissions for an Anthology Celebrating the Life and Work of Bill Morrissey
This book will be edited by Bill friends and New England writers Bruce Pratt and Suzanne Strempek Shea.

Singer, songwriter, novelist, outdoorsman, raconteur, family member, friend—Bill Morrissey was many things to the many, many, many people he touched in his life. We’d like to know just who he was to you. Submit your essay to be considered for a proposed anthology that will illustrate the innumerable sides of a man who left us far too soon, and left us with so much. Whether you know him from high school, or the high stool, whether you are a friend who shared a stage with him or a fan who shared his love of small towns on the river, tell us your Bill story.

Nonfiction submissions (essays, stories, lyrics, poems, appreciations) of up to 5,000 words should be sent in Word format by August 1 to bp.manuscripts (at) gmaildot.com. Include a cover letter with full contact information and a brief description of your connection to Bill. Contract will follow acceptance.

Suzanne Strempek Shea is the author of five novels and five works of nonfiction, including the newly released This Is Paradise: An Irish Mother’s Grief, an African Vllage’s Plight and the Medical Clinic that Brought Fresh Hope to Both. Her friendship with Bill sprang from their shared Polish heritage and their love of small towns on the river. Suzanne has been featured on NBC’s Today, National Public Radio and Voice of America, and in USA Today and The Washington Post. Her freelance work has appeared in The Boston Globe, The Philadelphia Inquirer, ESPN the Magazine, Yankee and Bark. Suzanne teaches at the University of Southern Maine’s Stonecoast MFA program and is director of the creative writing program and writer in residence at Bay Path College in Longmeadow, MA.

Bruce Pratt is the author of the novel The Serpents of Blissfull from Mountain State Press and the poetry collection Boreal from Antrim House Books. He has won prizes and awards for his drama, short fiction, poetry, and songwriting, and his work has been published in dozens of journal and reviews in the U.S., Canada, and Europe. For twenty years he plied his trade as a singer/songwriter and for fifteen of those years traveled extensively with Ramblin’ Jack Elliott. He was a long time friend and admirer of Bill, with whom he performed on many occasions. Pratt is the editor of the Annual American Fiction Anthology from New Rivers Press. Retired from performing, Pratt teaches Creative Writing and Literature at the University of Maine and to private students.