Karen Bovenmyer (Popular Fiction, S’13) is thrilled to announce her space zombies story “Failsafe” (The Crimson Pact Volume 5, Iron Dragon Press, July 2013) has been listed by Ellen Datlow as an honorable mention for Year’s Best Horror 2013. This was the story she read from for her graduate reading. Note, you’ll see other Stonecoast names on this list too (Bonnie Stufflebeam is on there twice)! If you write horror, this list is a great way to see what publications Datlow is reading—consider submitting to them. 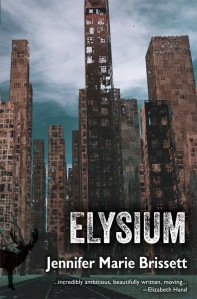 Jennifer Marie Brissett‘s (Popular Fiction, S’11) book Elysium, which was her Stonecoast thesis, has been published by Aqueduct Press  and is available on Amazon,  IndieBound,  Powell’s, Barnes & Noble, and Books-A-Million  or ask your local bookseller. Also, she will be interviewed on Hour of the Wolf with Jim Freund on WBAI on December 3rd.

Barbara P. Greenbaum (Fiction, S’05) just had two stories published: “About Time” will appear in the Fall issue of The MacGuffin, and “A Sensitive Man” appeared in The Penman Review in September. Barbara directs and teaches the creative writing program at Arts at the Capitol Theater, a public magnet arts high school in Willimantic, CT. Her stories and poems have appeared in a number of journals. She is currently working on her first novel. She writes under the pen name B. P. Greenbaum.

Mary Heather Noble (Creative Nonfiction, W’14) published her essay “Experimental Road” in Issue 16.2 of Fourth Genre (Fall 2014) and is pleased to report that the essay will also appear in the Winter 2014 print issue of Utne Reader.  Her essay “Acts of Courage,” winner of Creative Nonfiction’s The Human Face of Sustainability contest (Spring 2014, Issue #51), has also been nominated for a Pushcart Prize by the editors of Creative Nonfiction.  You may listen to Mary Heather’s podcast reading of “Acts of Courage” from her interview on the Jenny Green Jeans: Everyday Sustainable Living blog.

Anne Britting Oleson (Poetry, W’05) will have a new chapbook, Planes and Trains and Automobiles, coming out from Portent Press (UK) in early 2015.

An interview with Janet Passehl (Poetry, S’10) about her forthcoming book, Clutching Lambs, has been posted on the Negative Capabilities Press blog.

The 2014 edition of American Fiction: The Best Unpublished Stories by New and Emerging Writers has been released by New Rivers Press. Michael C. White—Stonecoast founding faculty member, Director of the Fairfield University MFA Program, and author of Five New York Times Notable Books—read twenty stories chosen by editor Bruce Pratt (Fiction, S’04) from nearly five-hundred entries and selected three prize winners and an honorable mention. White read all the submissions “blind.” Lee Hope, Stonecoast’s founding Director, was awarded Honorable Mention for her story “What to Take in Case of Fire” and Libby Cudmore‘s story “The Hand of God” is also included in the anthology.  The 2015 edition is currently in production and was judged by Pulitzer Prize-winning author Elizabeth Strout. The 2016 submission period will be announced in late winter.

“The Nurse We Needed,” an excerpt from a memoir manuscript by Lisa Romeo (Creative Nonfiction, S’08), appears in the Fall 2014 issue of The Healing Muse. Lisa recently read at the Live Literature event on the campus of Montclair State University (NJ), where she’s teaching an undergraduate CNF course this fall and spring semesters. Her manuscript was a finalist in the lyric CNF category of the recent Subito Press contest.

Lisa Taylor’s (Poetry, ’04) story “Immersion” was nominated for a Pushcart Prize by Crannog Magazine. She has new fiction forthcoming in Crack the Spine and Sonder Review, and her poem “Cathedral of Shadows” was nominated for the 2014 Best Indie Lit New England anthology.

Elizabeth Hand (Fiction, Popular Fiction) just turned in Hard Light, the third Cass Neary noir novel, to St. Martin’s Press. Her essay on the photographer William Mortensen appeared recently in the Los Angeles Times. Recent reviews include  Sarah Waters’ The Paying Guests for the LA Times, and in the Washington Post, Stephen King’s Revival, Meg Wolitzer’s Belzhar, and Anne Rice’s Prince Lestat.  On December 4, she’ll give a talk about Ursula K. Le Guin and literary fantasy as part of the NEA’s Big Read at the University of Maine-Machias.

Jim Kelly (Popular Fiction) has sold a triptych of flash fiction to the Magazine of Fantasy and Science Fiction. Two of the stories, now called  “Test” and “Tryst,” were written during previous Stonecoast residencies as part of his infamous Flash Fiction Challenge. Jim thanks his workshops for their help! His one-act play “The Promise of Space” has been published in the anthology Geek Theater, edited by Erin Underwood (a Stonecoast grad) and Jen Gunnels. Browse it here. The latest installment of his “On the Net” column, called “Billions and Billions,” has appeared online and in print in Asimov’s Science Fiction. Jim will be teaching at the Clarion Writers Workshop next summer, right before the Stonecoast residency; Jim is a graduate of Clarion and is returning to teach for the eleventh time.

Yankee Magazine features a new book by Suzanne Strempek Shea (Creative Nonfiction, Fiction) in its November/December issue. This Is Paradise: An Irish Mother’s Grief, an African Village’s Plight and the Medical Clinic That Brought Fresh Hope to Both is one of six books written by Yankee contributors and included in a piece titled “Where We Ought to Be” by Tim Clark, who has been the award-winning national magazine’s book reviewer for two decades. Called by Clark “a true story that vitalizes an Irish woman and an African village,” This Is Paradise is the first of two books Suzanne had published this year by PFP Publishing. The second, Make a Wish But Not For Money, a novel about a palm reader in a dead mall, launched in October.