Sheila Boneham (Creative Nonfiction/Cross Genre, S’13) had a lovely December. Her essay “A Question of Corvids,” winner of the 2014 Prime Number Magazine Creative Nonfiction Award, was nominated for a Pushcart Prize and for the Best American Science and Nature Writing anthology. Her novel The Money Bird (Midnight Ink, 2013) is a finalist for the Maxwell Award for Fiction from the Dog Writers Association of America. And her poem “On Eating My Way Through a Feast of Poems” appeared in Minerva Rising, Issue 6: Food. That poem began as an “evaluation” of a class on using food in writing taught by Cait Johnson, Jeanne Marie Beaumont, and Aaron Hamburger at the summer 2012 residency—you never know where the seeds will be planted!

Ed Boyle (Fiction, W’09) had two stories published by on-line journals in November: (1) “Honor Thy Wife” was nominated for a Pushcart Prize and published in Crabfat Literary Magazine. (2) He was the featured fiction writer in Mud Season Review and the story, “Making Weight,” can be viewed here.

Paula Treick DeBoard’s (Fiction, S’10) second novel, The Fragile World, was published on October 28 by Harlequin MIRA. She was recently a guest on Capital Public Radio’s Insight with Beth Ruyak to discuss the book. Her first novel The Mourning Hours (June 2013) was a recent finalist for the Housatonic Book Award (info here). Paula would like to give continued thanks to Ted Deppe, Suzanne Strempek Shea, and Boman Desai, who mentored her through early drafts of that book. A third novel is scheduled for publication in 2016. More information can be found on her website or on Facebook.

Adam Gallardo‘s (Popular Fiction, S’12) book, Zombified, will be available from Kensington books in stores and online later this month. As a promotion for the book’s release, Kensington will also be offering the e-version of his first book, Zomburbia, for just $2.99 across all platforms.

Andrea Lani (Fiction, W’14) had two CNF pieces published last month: an untitled essay about a tree, an owl, and a growing boy in the “A Place in Mind” section of the Winter 2014 issue of Northern Woodlands and  “Four Days at Russell Pond,” an account of her family’s first backpacking trip, in issue 19 of TrailGroove. She also read an abridged version of her recently published essay, “Here Be Dragons,” at November’s Local Writers at the Local Buzz event in Cape Elizabeth, ME, alongside novelist Maria Padian and poet Christian Barter.

Mary Heather Noble (Creative Nonfiction, W’14) is pleased to announce that her book manuscript, Plumes: On Contamination of Home and Habitat, was selected by Karen Joy Fowler as the winner of the 2014 Siskiyou Prize in New Environmental Literature. The Siskiyou Prize, sponsored by Ashland Creek Press, honors literary works that focus on the environment, animal protection, ecology, and wildlife.  Winners receive a cash prize, an offer of publication from Ashland Creek Press, and a four-week residency at PLAYA near Summer Lake in the Oregon Outback. Plumes was Mary Heather’s Stonecoast thesis.

Anne Britting Oleson‘s (Poetry, W’05) novel, The Book of the Mandolin Player, has been acquired by Bedazzled Ink Publishing Company for their B Ink imprint and will be published in summer 2015. That’s two different books next year, for the 10th anniversary of her Stonecoast graduation!

Catherine Schmitt‘s (Creative Nonfiction, W’12) essay “The Coyote Gangs of Hope” is in the current issue of 1966: A Journal of Creative Nonfiction. This piece was improved with the help of Rick Bass and participants in the Summer 2011 nonfiction workshop.

Erin Underwood (Popular Fiction, S’09) is the head of programming for Boskone 52, New England’s longest running science fiction and fantasy convention, which takes place in Boston from February 13-15, 2015. There will be a panel titled “Writers on Writing: Talking Plot with Stonecoast MFA Faculty,” featuring faculty members David Anthony Durham, Theodora Goss, Elizabeth Hand, and James Patrick Kelly—moderated by alumna Allison Hartman Adams. Stonecoast faculty and alumni will also be participating in a variety of other panels, readings, and discussions. Boskone is free to the public on Friday the 13th from 2:00-6:00 p.m., and attending memberships are required after 6:00 p.m. on Friday as well as for the duration of the convention. More information about the convention, programming, and weekend/one-day memberships can be found at www.boskone.org

Christopher Watkins‘ (Poetry, W’08) new column, “The Bottle & the Pen: An Exploration through Wine and Literature,” debuted on GrapeCollective on December 26, 2014. You can find the column here.

Jeanne Marie Beaumont’s (Poetry) book Letters from Limbo has been accepted for publication by CavanKerry Press.

Stonecoasters who wish to meet or reconnect with Stonecoast Ireland’s Ted Deppe and Annie Deppe will be interested in two Western Massachusetts appearances next month at Bay Path University, 588 Longmeadow St., Longmeadow, MA. Ted and Annie will give a reading open to the public free of charge Thursday, February 12, at 7:00 p.m. at Bay Path University. On Saturday, February 14, at Bay Path’s Writers’ Day, Ted Deppe will give a talk on Taking It All the Way to Coleman’s: On Abandoning the Good for the Marvelous. He will be joined by speakers Charles Coe, on Writing About Those Close to You: The Joys and the Terrors; Bruce DeSilva, on Writing Crime; Penny Guisinger, on Grant Writing; Nell Lake, on How I Went Deep: Writing Intimate Stories About Other People; and Roland Merullo, on The Demons of the Blank Page. For information on registration and fees for Writers’ Day, please write Briana Sitler, at bsiter@baypath.edu

David Anthony Durham (Fiction, Popular Fiction) has completed his long-delayed historical novel about the Spartacus slave rebellion. It’s off to his publisher, Doubleday, for publication sometime in 2016. Also, Redwave Films has renewed the film option for Gabriel’s Story for the twelfth year. The producer, Uberto Pasolini, and director, Alan Taylor, seem more confident than ever that this is the year they’ll be able to move the project forward.

Nancy Holder (Popular Fiction) has been been named the new vice president of the Horror Writers Association following the death of president Rocky Wood. She has also been invited to the annual Baker Street Irregulars Sherlock Holmes birthday dinner in New York City, which takes place during the first half of the Stonecoast winter residency. She will be signing In the Company of Sherlock Holmes with her NYT bestselling, Edgar-Award-winning editors Leslie Klinger and Laurie King, as well as Pulitzer-Prize winner Michael Dirda. She is also a Juror for the Shirley Jackson Awards and encourages published horror writers to consider asking their publishers to submit their work. Details are on the website. 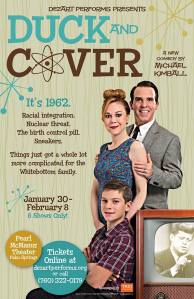 Michael Kimball’s (Popular Fiction, Scriptwriting) play Duck and Cover will run January 30 through February 8 in Palm Springs, CA. On January 22, Mike’s Actual Glass will be performed by The Boiling Point Players, in Houston, TX. Mike did the sound design for The Diary of Anne Frank, running January 9-18 (dates sound familiar?) at The Actors’ Studio of Newburyport, Newburyport, MA.

Elizabeth Searle (Fiction, Popular Fiction, Scriptwriting) is happy to report that her newest novel, We Got Him, will be published in 2016 by New Rivers Press. NRP is currently celebrating its 40th year in publishing and published Elizabeth’s most recent novel, Girl Held In Home.  Excerpts from We Got Him have appeared as stories in Epoch (story cited in Best American Short Stories), Words & Images, and Michigan Quarterly Review (the story was winner of the Lawrence Foundation Prize).  Details and dates for the novel TBA; visit:www.elizabethsearle.net

Suzanne Strempek Shea (Creative Nonfiction, Fiction) has been named to the board of directors of PEN New England, where she joins fellow boardmember and Stonecoast grad Anthony D’Aries. PEN is a worldwide association of writers and all who celebrate literature and defend free expression. PEN New England is a branch of PEN American Center and part of International PEN, the world’s oldest international literary and human rights organization. PEN is headquartered at the Massachusetts Institute of Technology in Cambridge.

From Andrea Lani (Fiction, W’14): The Literary Reflections department of Literary Mama has recently opened submissions for essays that explore the world of literature—reading, writing, working as a writer—from a mother’s perspective. We seek unique approaches and deep reflection on words and motherhood. Please see our submission guidelines and our archives of past essays. Literary Mama is also hiring several editors and assistant editors. This is a wonderful opportunity to be immersed in the production of a high-quality online literary journal among a team of dynamic and caring literary mamas.

From Amanda Pleau (Creative Nonfiction, current):  Call for submissions! Amanda Pleau has been judging a flash fiction competition at MASH Stories. The difference between MASH and most other competitions: no entry fee and they will provide notification of acceptance along with critical feedback and encouragement in almost no time at all. Details at mashstories.com.