S.M. Mack (Popular Fiction) has published her award-winning short story “The Carrying Beam” and Dan McMinn (Popular Fiction) has published his short story “Public Awareness” alongside original stories and poems by the rest of the Clarion class of 2012 in their fifth collection. Titled The Blue Volume, this collection will help support The Clarion Foundation’s essential work. In The Blue Volume, a Nepalese witch tempts her daughter to black magic, sinister (but cute) robots hound a homeless squatter, one man fights reconciliation to the end of the world and another reaches reconciliation with The Thing, a medieval barber bleeds female patients to feed his monstrous creation, and a princess emerges scarred from the test of the pea. The Blue Volume is available on a PAY-WHAT-YOU-WANT basis. Pay nothing. Pay everything. It’s up to you. All proceeds, after hosting fees, will benefit The Clarion Foundation.

Aaron Hamburger (Fiction, Creative Nonfiction) will be teaching a class on Andre Aciman’s novel Call Me By Your Name at Politics & Prose bookstore, January 7th, 6:00-8:00 pm. We’ll do a deep read of this contemporary classic and compare it to the film version.

Elizabeth Searle (Fiction, Playwriting, Popular Fiction, Scriptwriting) and Tamra Wilson‘s (Fiction, S’11) Idol Talk anthology has events forthcoming in NC, including on December 1st when Idol Talk readers perform in High Point, NC, and then attend a concert by Peter Noone (Herman of Herman’s Hermits), the iconic rock star who wrote the introduction to Idol Talk. In February, Elizabeth and Boston area Idol Talk readers including Suzanne Strempek Shea (Creative Nonfiction, Fiction) will perform at a reading-and-music fundraiser for Women’s Lunch Place, a Boston day shelter for homeless women. Also in February, a new performance of the concert version of Elizabeth’s Tonya & Nancy: the Rock Opera will take place in New York City. For details and updates, see http://www.elizabethsearle.net.

Peter Adrian Behravesh (Popular Fiction, W’18) appeared on the November 20th episode of PodCastle as Fixer, in Natalia Theodoridou’s story, “Fixer, Worker, Singer” (available here). In addition, his paper “Mischief in Their Hearts: Female Empowerment in the Persian Fantastic” was accepted for presentation at the 40th International Conference on the Fantastic in the Arts in March 2019.

Carina Bissett (Popular Fiction, S’18) is pleased to announce that her essay “Mapping the Collective Body of Frankenstein’s Brides” was included in the collection Birthing Monsters: Frankenstein’s Cabinet of Curiosities and Cruelties. This essay came out of her third semester project, which she worked on under the direction of Cate Marvin. Parts of this paper were originally presented at the 2018 International Conference for the Fantastic Arts, and it was also recently accepted for presentation at StokerCon in May 2019!

Karen Bovenmyer (Popular Fiction, S’13) narrated “Prerogative of the Gods” by Nathaniel Green and “Between Battles” by Mary Soon Lee for Heroic Fantasy Quarterly #38. She enjoys narrating and has found opportunities to do so many different ways—she’s happy to chat with you if you’d like to learn more about narrating. Also, Karen is thrilled to have been included in a Speculative Poetry Reading at University of Northern Iowa on November 12th. The reading celebrated Speculative Poetry Month (November) and featured the Science Fiction and Fantasy Poetry Association president Bryan Thao Worra’s amazing poems. You will enjoy his hilarious quotes in this article about the event. Also, Karen’s voice can be heard narrating Corey Mallonee’s Oz-inspired story “Radio Free Heartland” on the Cast of Wonders young adult podcast. Viva Stonecoast! 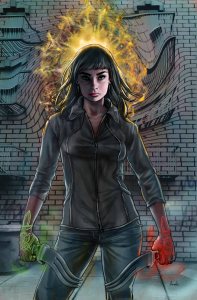 Terri Glass’s (Poetry & Creative Nonfiction, S’13) essay “Tiger Lilies” will be published in issue 9 of Young Raven’s Literary Review and a haiku has been published in 50 Haikus, Issue 14. She will also read at Book Passage in Corte Madera, CA, January 27th, 2019, from the anthology Fire and Rain: Ecopoetry of California.

Veda Boyd Jones (Fiction, S’17) has sold a short story to weekly magazine Woman’s World. Her story will be in the issue to hit newsstands the first week of January.

Rebecca Kightlinger‘s (Fiction, W’14) debut novel, Megge of Bury Down, published by Zumaya in paperback and ebook versions, is now available as an audiobook on Audible.com.

Paul Kirsch (Popular Fiction, W’11) co-wrote The Forgotten Sanctum, which releases on December 13th; this is the last planned major DLC for Pillars of Eternity 2: Deadfire: “When a violent tremor shatters the islands of the Deadfire, the greatest wizards in Eora seek out the aid of the Watcher. The archmage Maura has vanished into the depths of a newly opened dungeon located in the Black Isles and threatens to awaken what lies forgotten there. Follow Maura’s trail and determine the fate of one of the Deadfire Archipelago’s most closely-held secrets.” You can read more about The Forgotten Sanctum here.

Andrea Lani (Fiction, W’14) was thrilled to be nominated for a Pushcart Prize for her essay “The Sparrow’s Song,” which appeared in The Sunlight Press in July. She has another essay, “Memento Vivere,” slated for publication on December 1st in the Winter 2018 issue of Still Point Arts Quarterly.

Danielle Letourneau (Popular Fiction, S’15) is thrilled to announce that her paper “Pejorative and Polarizing Perceptions: The Fight for the Abolition of Genre Prejudice” has been accepted for presentation at the 2019 conference of the International Association for the Fantastic in the Arts. The paper was her third-semester project, worked on with the wonderful Liz Hand.

More than a hundred people attended the book launching of Tom MacDonald‘s (Fiction, W’09) fourth crime novel Murder in the Charlestown Bricks. The event took place at the Navy Yard Bistro in Charlestown, kickstarting the publication. Tom’s December appearances are listed below. The books are $15.

This month Catharine H. Murray (Creative Nonfiction, S’17) will be joining poet Elizabeth Austen at Elliott Bay Books in Seattle on December 5th at 7:00 p.m. for a reading and discussion of her new memoir Now You See the Sky. On December 6th at 8:00 a.m., she will lecture at Seattle Children’s Hospital for the doctors and staff at Grand Rounds on using writing as a tool for healing.

R.M. Romero‘s (Popular Fiction, S’15) novel, The Dollmaker of Kraków, has been nominated for the Carnegie Award in the United Kingdom.

Robert E. Stutts (Popular Fiction, S’10) has a story in the October issue of See the Elephant, “The Unreal World Too Strangely Near” (one of his thesis stories, with thanks to Nancy Holder and Jim Kelly for their mentorship)—and, yes, he forgot to include his own news in the November post!

Lisa C. Taylor‘s (Poetry, S’04) short story “Consorts” was nominated for a Pushcart Prize by The New Southern Fugitives. This story was included in her recent collection, Impossibly Small Spaces, published in early November 2018. Lisa will be reading at libraries and venues in New England. For information, visit www.lisactaylor.com.