Celebrate the greater Stonecoast MFA literary community at our second annual One Voice open-mic event, Tuesday, May 7th, 7:00 p.m. at Oxbow Blending and Bottling in Portland’s East End. Sign up here to share a three-minute reading of your original work. (Space is limited, so reserve your spot now!) Free and open to the public. Oxbow’s locally brewed craft beer will be available for purchase during the event, and there are a number of local dining options nearby. Bring your friends! For more info and to RSVP, click here. Contact Stonecoast MFA Community Outreach Coordinator with questions: Jenny O’Connell at jennifer.a.oconnell@maine.edu. 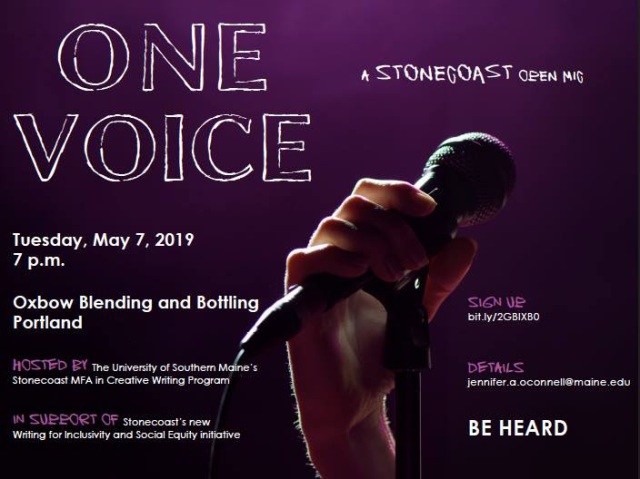 Call for Submissions: Climate Anthology
Deadline: May 31st
Now it is up to the artists. The scientists have warned us. They have been warning us for fifty years. But we have only 12 years to dramatically reduce our current carbon use before we cross the line into unprecedented climate catastrophe. We—Meghan Sterling and Kathleen Sullivan (Poetry, ’06)—are editing an anthology of Maine poets and essayists whose writing will, we hope, wake us, stir our imaginations both for our global future and our way of life here in Maine. We are looking for writing which helps find language for the fear, guilt, and grief of this moment, and, perhaps, for the hope. Published and unpublished work sought. Littoral Press has agreed to publish the book which we hope will be in Fall, 2019. The voices of youth most welcome. Send one essay (max 1,000 words) or up to three poems to: climateanthology@gmail.com Include a short bio. Deadline is May 31st. Kathleen notes that Stonecoast alums are encouraged to submit even if they don’t live in Maine now.

Tom Coash’s (Playwriting, Dramatic Arts) play Raghead will be part of the Downtown Urban Arts Festival at the Wild Project NYC, May 9th at 8:00 p.m. His new short play Bubble, Bubble will be part of the fun and fabulous Boston Theater Marathon XXI, Boston, May 19th.

Aaron Hamburger‘s (Fiction, Creative Nonfiction) new novel Nirvana Is Here is being released on May 14th. Readings and events are planned this month in New York, DC, Detroit, Chicago, and Baltimore (and next month in Seattle; San Francisco; Portland, OR; Annapolis; and Portland, ME). Click here for the complete schedule. Be sure to get your copy at your favorite indie bookstore! Aaron’s essay on Kurt Cobain’s gay rights legacy was in The Washington Post. And his piece about “Lessons I Learned in Writing My #MeToo Story” was posted on the Submittable blog.

Elizabeth Hand (Fiction, Popular Fiction) is the subject of a feature podcast on This Is Horror, discussing music, folk horror, the English folk tradition and her award-winning novella, Wylding Hall. Her Cass Neary books were recently named as one of the top ten hipster crime novels at CrimeReads, and also among the top eight queer crime novels featuring women at Autostraddle, the world’s most popular lesbian website. 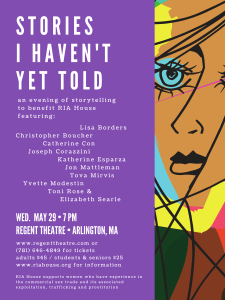 Elizabeth Searle (Fiction, Playwriting, Popular Fiction, Scriptwriting) has film script news: she won a 2019 Los Angeles Film Award in April for her screenplay A Four-Sided Bed, adapted by Elizabeth from her novel. In the past month, Elizabeth’s recently completed script has also been chosen as one of two feature film scripts to be presented at the 15th ReelHeART International Film Festival in Toronto, which Elizabeth will attend in July. In addition, the script was named an Official Selection at the Script Summit festival in Las Vegas and a Finalist at the Indie Visions Film Festival as well as in the Los Angeles Film & Script Festival. A Four-Sided Bed is being developed as a feature film by two producers, David Ball (producer on over thirty films including the recent Tag; the award-winning 96 Minutes, starring Evan Ross and Britney Snow; and Yellow) and Amy Carpenter Scott/Creatrix Films (Pitstop). More news coming soon on this film development project. In May, in addition to the Idol Talk theater event (see Tamra Wilson note below), Elizabeth has a second theatrical event in May: she will be a featured Storyteller at the fundraising event Stories I Haven’t Yet Told, an Arlington, MA, fundraiser for RIA House, which “supports women who have experience in the commercial sex trade and its associated exploitation, trafficking and prostitution,” on May 29th at the Regent Theater at 7:00 p.m. For updates, including on Idol Talk onstage, see: http://www.elizabethsearle.net

Jillian Abbott (Popular Fiction, S’04) had two op-eds published in The New York Daily News last month: “Sri Lanka and the Burdens of History” mentions her MFA creative thesis, and “CUNY’s Teachers Get Stiffed” talks about the MFA and life trapped as an adjunct.

Elizabeth Beechwood (Popular Fiction, S’14) is pleased to announce that her short story “Yes, Yes, Yes, We Remember” was published in Third Flatiron’s Hidden Histories Anthology. This is the second story she’s had published that’s set in her fictional world of the Vysoké Tatry—the High Tatra Mountains of Slovakia.

Karen Bovenmyer (Popular Fiction, S’13) is excited to be a guest at StokerCon (May 9-12) where she will speak on the panel “Rise of the Pod(cast) People” about her job as Assistant Editor of PseudoPod. She’s also serving on “Writing to Prompts: Prose, Poetry, and Sources of Inspiration.” On Saturday, she’ll be the game master for four authors playing Bedlam Hall, a macabre Victorian role-playing game (think Downton Abbey for horrible people). Come watch us play! It’s guaranteed to be good times. Starting in May, Karen is also teaching a twelve-week online creative writing class for Western Technical College. She welcomes Stonecoasters who want some online teaching experience to pair up with her as mentees. Viva la Stonecoast!

Jennifer Marie Brissett (Popular Fiction, S’11) has made a good deal for two-books at auction with Tor. Eleusis, the first of the two books, is a stand-alone sequel to her first novel Elysium (Aqueduct Press, 2014) and is due to be published in Summer 2020.

Linda Buckmaster (Creative Nonfiction, S’11) is attending a two-week residency in Cove Park, Scotland. She will be working on her latest hybrid literary project inspired by cultures in along the North Atlantic Rim.

Penny Guisinger‘s (Creative Nonfiction, S’13) latest piece ran at Solstice this month. “Borne Back Ceaselessly” explores her longtime relationship with the work of F. Scott Fitzgerald through the lens of a thing they shared: alcoholism. (Hint: he was dead at 44. Currently, Penny remains not-dead.)

Gail Hovey (Creative Nonfiction, S ’11) is pleased to announce that her story “Lost Change” appears on the Brooklyn Non-Fiction Prize blog. It is an excerpt from her memoir What Goes by the Name of Love.

Jeff Kass‘ (Fiction, S’09) upcoming new poetry collection Teacher/Pizza Guy is now available for pre-order from Wayne State University Press’ Made in Michigan Series. According to the press release, the book is “a collection of autobiographical poems from the 2016–17 school year in which Kass worked as a full-time English teacher and a part-time director for a literary arts organization and still had to supplement his income by delivering pizzas a few nights a week. In the collection, Kass is unapologetically political without distracting from the poems themselves but rather adds layers and nuances to the fight for the middle class and for educators as a profession.” David Hecker, President of the AFT Michigan Teacher’s Union, adds, “I never really cared for poetry, but I truly loved Kass’s work. He speaks to all of our insecurities and vulnerabilities, giving a voice to what we want to say but rarely do. Yes, teachers are struggling to get by financially and it’s a shame that education is not being made a higher priority in our society. Thank you, Jeff, for opening the door to this conversation in a creative and enriching way.” Poet Ross Gay says, “What a beautiful and moving and funny and un-heroic and angry and tender and honest book of poems about labor, aging, love, and, as Kass says, finding ‘meaning in every ice patch on the sidewalk.’ This book’s heart is enormous. I love it.” Official release of the collection happens on August 26th. Pre-orders are available here.

Alan King (Poetry, W’13) created a short video on his final reading as the Howard County Literary & Poetry Society’s 2018/19 Writer-in-Residence. You can watch it here.

Tom MacDonald (Fiction, W’09) and two other local authors held a panel about their new novels as well as their writing and publishing experiences at the Thayer Public Library in Braintree, MA, on April 27th.

Cristina Perachio (Fiction, S‘14) will have her short story “Hunters” published in the May issue of EPOCH Magazine. She is very pleased to see this story placed in Cornell’s literary magazine as it is one of the stories she originally wrote as part of her Stonecoast application, and it has been workshopped by many fellow Stonecoast students and professors.

Bruce Pratt (Fiction, S’04) will read at The Busy Bee in Cape Elizabeth, ME, on Saturday, May 25th, at 4:00 p.m. as part of the series curated and hosted by Marcia Brown.

Sean Robinson (Popular Fiction, W’14) is pleased to share that his essay “More than Brothers,” a look at LGBT characters in Harry Potter (hint: there’s only two, sort of), was accepted for the Academic Track at WorldCon this August in Dublin, Ireland. He has also been awarded a grant from the Marion and Jasper Whiting Foundation to spend the month of July in Rome, Italy.

Lisa Romeo (Creative Nonfiction, S’08) will be the keynote speaker at the NJ Women Who Write Conference in Madison, NJ in September, and in August at the Hippocamp19 Conference for Creative Nonfiction Writers in Lancaster, PA, she will lead a session on Reading as a Writer and appear on a panel about Writing While Parenting.

Nikki Sambitsky‘s (Creative Nonfiction, W’18) essay “Chester Bennington is Dead” was recently selected for publication in The Manifest-Station by founder Jennifer Pastiloff and editor Angela M Giles. The essay uses anaphora as a device to help Nikki deal with the sad and untimely death of Linkin Park’s lead singer, Chester Bennington, to suicide, as well her own clinical depression and suicidal thoughts. Nikki uses unconventional and hybrid forms to help her tackle the deeply difficult and grief-filled issues in her life such as depression, family dysfunction, and her children’s autism. This is the second essay that has been published from her larger essay collection Perseverate, Linger, which has been submitted to PANK and Sarabande Books and is eagerly awaiting a decision. A link to the published essay is forthcoming.

Lisa C. Taylor‘s (Poetry, S’04) 2011 collaborative collection, The Other Side of Longing (with Irish writer Geraldine Mills), was adopted by an Irish Literature class at University of Connecticut for the 2019 spring semester. Both Lisa and Geraldine had a chance to visit the class on April 11th and discuss their summer together in Ireland in 2009. Lisa will be teaching an all-day fiction class for the School of the West in Mancos, Colorado (right near Mesa Verde National Park), on June 15th. Anyone can sign up via this link. Also, Lisa has been chosen as a reader for the Connecticut Author’s Trail; she will be reading at Chaplin Library in Chaplin, CT, on August 12th at 7 p.m.

Faculty member Elizabeth Searle and alumna Tamra Wilson (Fiction, S’11) are heading up a special reading, Idol Talk: A Magical Memory Tour of Teen Idols, on May 10th and 11th at the Firehouse Performing Arts Center, Newburyport, MA. Show time is 8:00 p.m. both nights. The reading, featuring dance numbers and readings from Idol Talk, a teen idols anthology that Searle and Wilson co-edited for McFarland Publishing in 2018. Actress Marianne Leone will emcee the fundraiser for Exit Dance Company and Firehouse PAC. Among the Stonecoasters participating are faculty member Suzanne Strempek Shea and the works of several alumnae including Lee J. Kahrs, Kate Kastelein, Michelle Soucy, and Darlene Taylor.

One thought on “Community News & Updates May 2019”