STONECOAST MFA VIRTUAL WRITING SERIES
In an effort to connect our community and continue learning together from afar, Stonecoast is launching a monthly writing session led by a faculty member or guest instructor! Aaron Hamburger (Fiction, Creative Nonfiction) kicked off our first session in April with a fantastic Mindfulness and Creative Writing class. We are thrilled to present Susan Conley (Fiction, Creative Nonfiction, Writing for Social Change) on Monday, May 18th, with “Voice Across Genre: Tone and Pitch and How to Really Say What You Are Feeling,” followed by Justin Tussing (Stonecoast Director) on Monday, June 8th, with a pre-residency generative writing session.

Information and Zoom links will be distributed to current students and faculty via email, and to the greater community via the Stonecoast Portland Meetup group and the Friends of Stonecoast MFA Facebook Group. If you are unable to access any of these platforms, email Special Projects Coordinator Jenny O’Connell (jennifer.a.oconnell@maine.edu) to be added to the list.

You can also receive weekly writing prompts from faculty on the Stonecoast Facebook Page.

Natalie Harris-Spencer (Fiction) has been selected by Oyster River Pages for publication under their “Emerging Fiction Voices” category, established to showcase new writers who are just beginning to submit their work to journals. Her short story “Fish Out of Water” will be published in the Fourth Annual Issue of Oyster River Pages, due Summer 2020 (publication details to follow). ORP is a literary journal that embraces the reality that the personal has become the political and actively seeks to publish those who bring balance and diversity to historical institutions of power.

Nina Lichtenstein (Creative Nonfiction) recently had another piece up on the Brevity blog about how the lockdown has provided her with a much welcomed focus on writing, stripped of the otherwise regular and non-essential diversions. She has also embarked on a new project and is looking for contributors: If you know someone who is a Jew by choice, the planned anthology Our Stories, Our Tribe: Personal Essays by Converts to Judaism is looking for diverse voices in essays between 1500-4000 words. Email Nina (nblichtenstein@gmail.com) if you would like a copy of the Call for Submissions to share.

Elizabeth Searle (Fiction, Playwriting, Popular Fiction, Scriptwriting) was happy that her novel We Got Him was chosen to be featured in April on Snowflakes in a Blizzard, which highlights books by Indie press writers. As noted in this piece, We Got Him, which was published by New Rivers Press, is also out in a 2018 audiobook version—published and narrated by star Stonecoast alumna Tanya Eby and her audiobook company, Blunder Woman Productions.

The film short The Sound of a Wild Snail Eating, adapted by Elisabeth Tova Bailey (Creative Nonfiction, S’15) from her memoir of the same title, won a Special Jury Mention from the ÉCU—The European Independent Film Festival in Paris, and an Honorable Mention from the USA Film Festival’s International Short Film & Video Competition in Dallas, Texas.

Jennifer Marie Brissett (Popular Fiction, S’11) made a guest post called “The Sophomore Book” about writing her next book on Fantasy Cafe for Women in SF&F Month. She also had a new poem published by The Free Library of the Internet Void called “Remember.” And AAWW Radio posted Breaking into Speculative Fiction, a panel discussion with Jenn and Malka Older, moderated by Tim O’Connell. 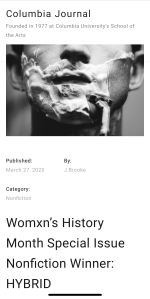 Renee S. DeCamillis (Popular Fiction, W’14) is excited to announce that she has found a means to get out and share her book The Bone Cutters during this pandemic. From May 11 to June 11, Renee is doing an online book tour, where her work will be featured on 50+ blogs. There will be a video reading, an interview, an excerpt or two, as well as free giveaways. Here is the link to find out how and where to check it all out. Stay safe, everyone!

Andrea Lani (Fiction, W’14) was thrilled to have her essay “Faith in a Seed,” about motherhood and the extinction and rebirth of the American chestnut tree, published in the current issue of Spire: The Maine Journal of Conservation and Sustainability.

Ellen Meeropol (Fiction, W’06) and Robin Talbot (Stonecoast Associate Director) invite the Stonecoast community to a Virtual Book Event at PRINT Bookstore in Portland on May 13, 2020, at 7:00 pm. Co-hosted by Maine Writers and Publishers Alliance (MWPA) via Zoom, Ellen will read from her new novel, Her Sister’s Tattoo, and talk with Robin. To register, visit here or here. 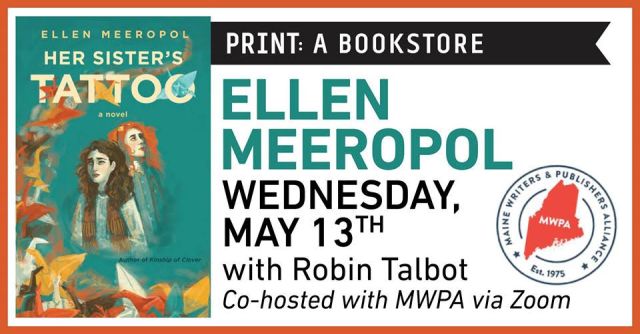 John Christopher Nelson‘s (Fiction, S’15) stories “Sola Fide” (originally featured in the summer 2016 issue of Able Muse), “Avoidance,” and “Meaning As Use” are all featured as the fiction portion of Lights, the inaugural issue of Pleasure Boat Studio‘s new zine, available as a free PDF. John also read his story “Good Friday,” originally featured in Volume VI of The New Guard, on Good Friday for West Seattle’s own Pegasus Book Exchange.

Jenny O’Connell‘s (Creative Nonfiction, S’17) recent tribute to the late, great Ryan West—which doubles as an ode to the ultimate frisbee community—was published in Ultiworld magazine. Her essay “Valley of the Bulls” won the 2019 Appalachia Journal Humor in the Wild Contest, and is now available in print. An outdoor contributor for Maine Magazine, Jenny’s profile on camp owner and adventurer Chloë Rowse was published in March, and she has a forthcoming feature on ice climbing in Maine later this year. In April, Jenny signed with agents Jamie Chambliss and Steve Troha of Folio Literary Management, who will represent her book project, Finding Petronella.

Suri Parmar (Popular Fiction, W’17) was recently awarded a media grant from the Ontario Arts Council for her experimental short You’re Smart, her first foray into non-narrative filmmaking. While production is presently on hold due to the ongoing COVID-19 pandemic, she hopes to complete her film in the following year.

Three short pieces from sid sibo’s (Fiction, W’19) in-process collection Familiar: Stories have been awarded the Neltje Blanchan Memorial award from the Wyoming Arts Council for best writing “informed by a relationship with the natural world.” Two other stories from the collection have earned Honorable Mentions, one of which, “Bull,” will be published online in Cutthroat magazine. The pen name can be traced to Stonecoast 2019 alum sidney woods.

Patricia Smith’s (Poetry, S’08; former faculty member) poem “Now He’s an Etching” appeared in The Academy of American Poets’ Poem-a-Day email for Thursday, April 16th.; the poem can be read and heard on the poets.org website.

Jacob Strunk (Fiction, W’07) was featured in April’s Voyage LA, an online magazine celebrating the artists and eccentrics that define Los Angeles. The profile features no revelatory bombshells, but there are some fun photos.

Lisa C. Taylor (Poetry, S’04) will have upcoming poetry published in Lily Poetry Review and Soul-Lit. Her book review of Rebecca Foust’s The Unexploded Ordnance Bin was published in Mom Egg Review in April. Lisa’s short story “Lucky” was shortlisted in the 2020 Fish Short Fiction contest, judged by Colum McCann. She has been a mentor through the AWP W2W program this spring, working with a fiction writer from Georgia. And Lisa will have a new collection of poetry published by Arlen House/Syracuse University Press in the spring of 2021.

Rhiannon J. Taylor’s (Popular Fiction, S’19, writing as R. J. Howell) dark fantasy/horror story “What You Lost in the Wildermere” has been published by Arsenika in their sixth issue. Additionally, her story “Parasites” is forthcoming from Frozen Wavelets.

As reported by Locus, Erin Underwood (Popular Fiction, S’09) won the 2020 Down Under Fan Fund (DUFF), which sends a fan from North America to CoNZealand, the 78th Worldcon. Paul Weimer, the North American DUFF administrator, said, “With ConZealand being a virtual Worldcon this year and Corvid-19, Erin will not be traveling to New Zealand this year, but hopes to travel to Australasia in the DUFF tradition in 2021, health and world events permitting.” Erin will also take over from Weimer as the new North American administrator.

Marco Wilkinson (Creative Nonfiction, S’13) is now the nonfiction editor at The Los Angeles Review. He is looking for fresh, engaging essays; in particular at this moment, he’d love to read about life during COVID-19. You can submit here.